With the release of a new Digital I/O card, engineers and scientists can now generate and acquire fast digital signals in a cost-effective way. Measuring just 168 x 107 mm (6.6 x 4.2 inches), the small-sized M2p.7515-x4 by Spectrum Instrumentation is a half-length PCIe card that can be inserted into almost any desktop PC, turning it into a powerful tool for applications such as logic analysis or pattern generation. The card features 32 parallel channels that can be clocked at speeds up to 125 MHz.

The channels are accessed from two standard Hirose FX2 connectors located on the front panel. A 3.3 V and 5 V TTL compatibility for digital acquisition makes the channels suitable for use with a wide range of digital signals. In generation mode, the cards typically deliver output levels of 0.2 V for low states and 2.8 V for high states into high impedance.

Designed for maximum versatility, the cards come with 1 GB of onboard memory as standard and a variety of different acquisition and replay modes. For example, when generating patterns, the cards can operate in Single-shot, Multiple Replay (Burst), Gated Replay, Sequence and FIFO modes. These modes make it possible to generate almost any signal pattern. It’s even possible to load new data to the onboard memory while replaying previously-stored signals. Furthermore, the ability of the cards to use FIFO streaming with a top transfer speed over the PCIe bus of 700 MB/s, enables users to generate constantly changing digital patterns for lengthy periods.

Similarly, when acquiring digital signals, the cards support Single-shot, Multiple Recording, Gated Sampling and FIFO modes. Combining the different modes with the large onboard memory makes it easy to capture and monitor long and complex digital signal patterns. To ensure timing precision, the cards feature a flexible internal clock design with an onboard reference that’s accurate to better than 1 ppm. If required, they also support the use of a direct external clock or an external clock reference.

The model M2p.7515-x4 is fully programmable and comes with drivers for Windows and Linux operating systems, as well as programming examples for C++, LabVIEW, MATLAB, Visual Basic.NET, Python and other popular programming languages, speeding up development and efficiency. Spectrum also offers its control software, the SBench 6 that allows signal generation, acquisition, display, processing, storage and reporting. Data can be acquired and stored with SBench 6 and then sent back to the M2p.7515-x4 at a later time for replay. Data sharing with other programs or devices, such as oscilloscopes, is also possible using built-in import/export functions for transferring data in Binary, ASCII or Wave formats.

For applications that require synchronisation between multiple cards, the M2p.7515-x also supports Spectrum’s unique Star-Hub clock and trigger distribution system. This option allows up to 16 cards of the M2p-family (Digitizers, AWGs and Digital I/O cards) to all share a common clock and trigger. For example, using Star-Hub together with 16 of the new M2p.7515-x4 cards could create a single system with 512 fully synchronised Digital I/O channels.

“The M2p.7515-x4 is our smallest Digital I/O card to date. It’s been designed to deliver a nice balance between price and performance, giving users a cost-effective solution whenever fast digital signals need to be acquired, generated and analysed. It also complements our analogue signal acquisition and generation products, fitting in perfectly with the mid-range M2p.59xx Digitizer series with 5 to 125 MS/s and 16-bit, plus the AWGs of the M2p.65xx series with 40 to 125 MS/s and 16-bit. These Digitizers and AWGs of the M2p family offer up to 8 channels per card,” says Carsten Gralla, Managing Director at Spectrum Instrumentation. 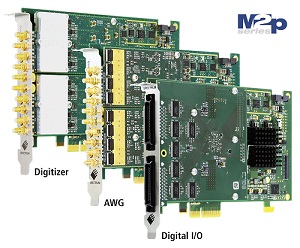 The M2p.7515-x4 is available now from Spectrum Instrumentation.